Golden State Warriors is one of the primary basketball teams in California. They are currently based in San Francisco, although earlier the team played for Philadelphia. The club is one of the older NBA members – being with the organization since the start – in addition to being one of the more successful.

Who owns Golden State Warriors? The club is owned primarily by Joseph Lacob and Peter Guber. Lacob, however, holds a slightly larger share. 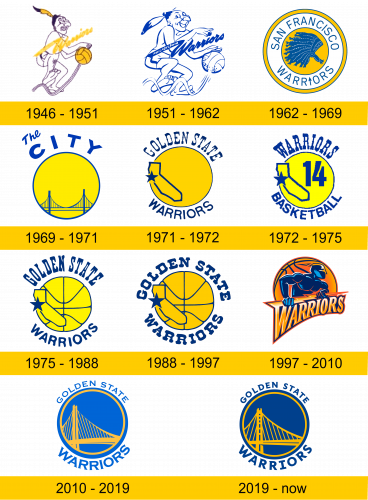 The team was established in 1946 in Philadelphia, which is why they were called ‘Philadelphia Warriors’ back then. The current name wasn’t adopted until 1971, years after they moved to San Francisco. The ‘Warriors’ part refers to the Native Americans, who were a big inspiration for the branding initially. 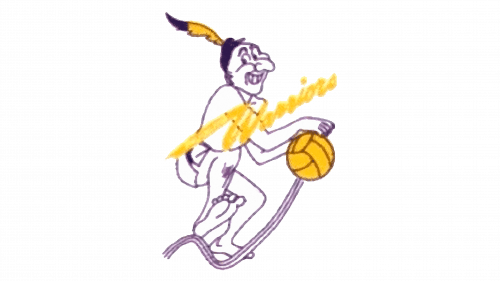 The initial logo depicted a pencil-drawn Native American with much exaggerated, goofy features. Apart from black and white details, he also held a yellow ball and sported a yellow feather in his hair. Moreover, the team’s shortened name – ‘Warriors’ – was written in yellow just across the center of the illustration. Much of the logo stayed the same into the 1951, although all the colored parts were turned blue this time, including even the name. They also made the man squatter and enhanced many of the details (such as the ball’s trail). 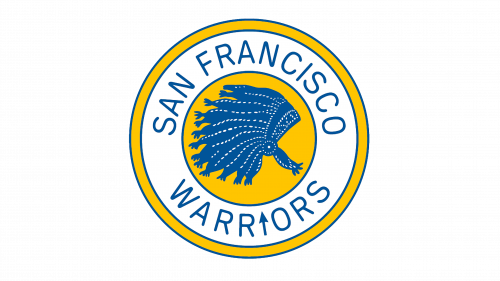 In 1962, they decided to combine yellow and blue. The new logo featured a circular shape with a white ring around the center and the yellow outline. The blue was represented by the feathery headwear inside the central section, and the letters that made up the team’s full name – ‘San Francisco Warriors’ – in the white section.
Both yellow and blue appear on the Philadelphian own flag, hence the coloring choice. 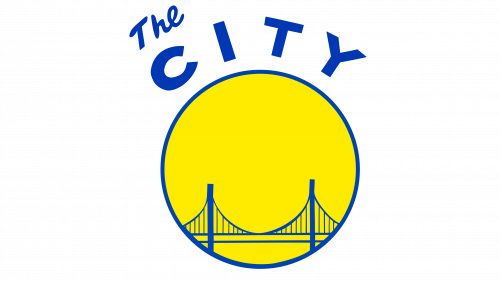 In 1969, they opted for a simpler picture: a yellow circle with blue outline and a blue silhouette of the famed Golden Gate Bridge in the lower part. And they also added a haphazard, cartoonish inscription that said ‘the City’ in blue right above the circle. In the next iteration, the circle stayed, except they got rid of the bridge and put the California’s map on its left side (and also slightly beyond the circle). The blue star pinpointed the location San Francisco. Furthermore, at this point the team was already called ‘Golden State Warriors’ (after California), and the name was thus arrange along the top and bottom of the circle.

At this point, they also added the number ’14’ written in bold blue digits on the circle’s right side, as well as altered the inscriptions beyond the figure. The upper part just said ‘Warriors’ now, and the lower one – ‘Basketball’. 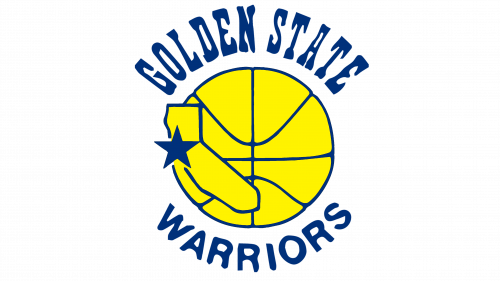 The 1975 emblem mostly returned to the 1971 design, except they also added blue seams all over the circle, just like seen on the basketballs. 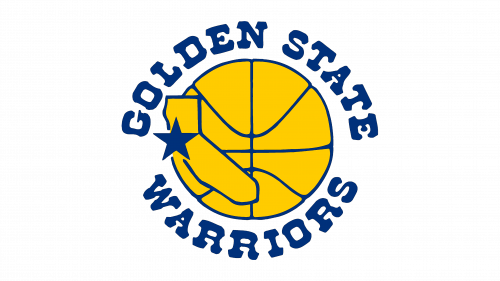 In 1988, they decided to rearrange the inscriptions, make them bolder and wider, while also introducing a darker shade of yellow for the rest of the logo. The 1997 instead depicted a man’s silhouette colored dark blue and wearing an orange mask. In his hands, he was carrying a lightning that was attached to the word ‘Warriors’ down below. Both that, and the big basketball in the background were orange, but the inscription also glinted and had way more volume. 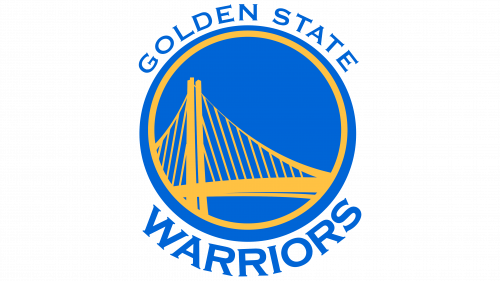 The 2010 design was instead a white blue circle with a thin yellow frame inside. In it, they placed the Golden Gate again, except close and with a lot more nuance. And unlike then, it was fittingly yellow this time.
Like before, they’ve placed the team’s full name along the top and bottom edges, except in a far more mundane script, colored in light blue. The entire logo was also visibly skewed away, which added perspective and made the top inscription smaller in comparison. 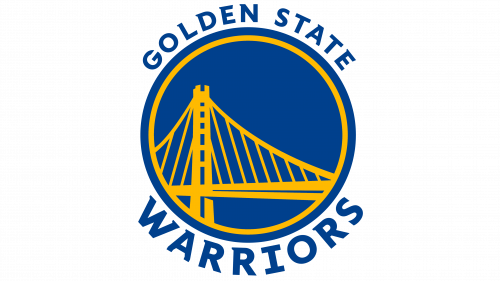 Two things changed in 2019: the blue became a dark hue again, and they largely removed the perspective effect. However, the inscriptions were still dissimilar in terms of size. 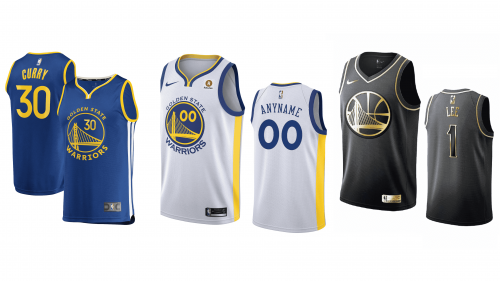 The primary colors were since 1946 one of three variants, at least for away: blue-with-yellow, white-with-blue or black-with-white. The home were initially white with various colors, but then turned to yellow-with-blue in 64-86. After that, Warriors returned to mainly white uniforms.