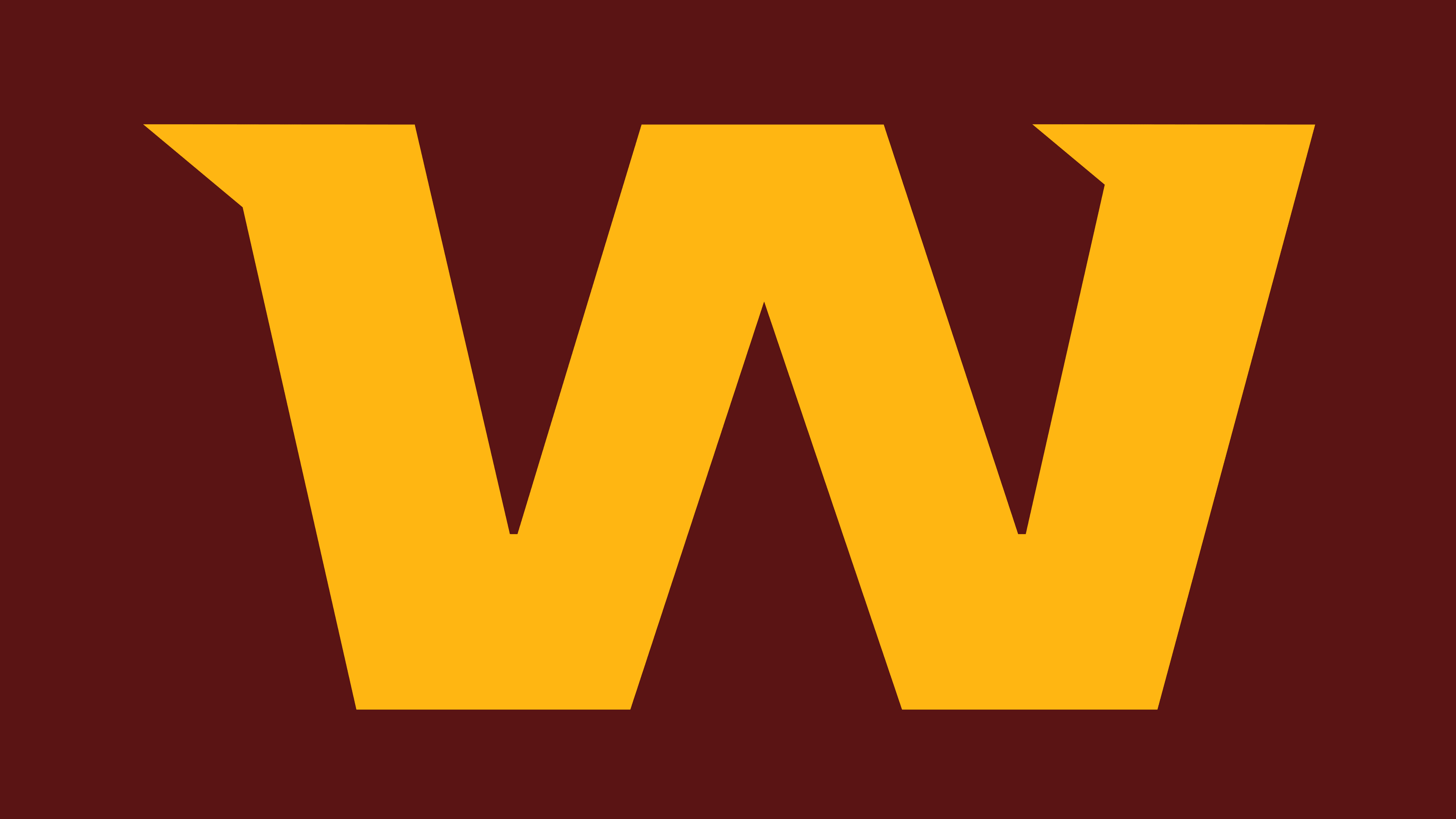 Washington Football Team (formerly known as Redskins) is an American football team from Washington D.C. They are one of the most successful teams on the East Coast, and you can often see them inside the top-10 list of NFL teams overall. They are particularly known as a subject of controversy surrounding the use of Indian-inspired names.

Who owns Washington Redskins? The club is owned by the entrepreneur Daniel Snyder and his family. FedEx has some ties to the brand, but only because they own their stadium. 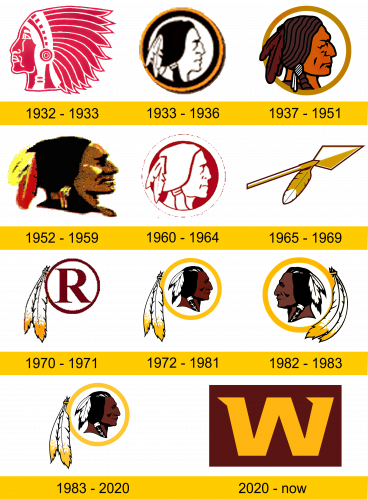 The team was established in 1932 in Boston, where they were originally known as ‘Boston Braves’ (‘brave’ being a historic word for Native American warriors). The team moved to Washington in 1937 and adopted the name ‘Washington Redskins’, which was discarded in 2019 following the long-brewing controversy. 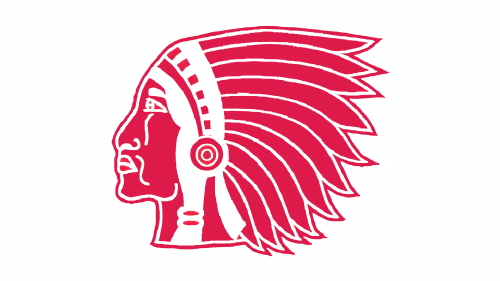 The logo was initially an artistic depiction of an Indian’s head. Most features are rather simplified, including the feathered headwear that occupies most of the functional space anyway. Regardless, all the logo elements are pale red & white: the obvious choice for the team named after Indians. 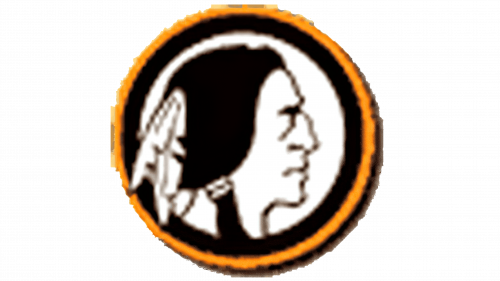 The 1933 emblem was a different style and approach. It was mostly a black-and-white depiction of the same thing, except the features are slightly more realistic, and there are way fewer artistic details. The feathered headwear, for instance, is just two feathers sticking from the man’s hair.
This entire image is put inside a black circle, which is then encircled by a layer of orange. 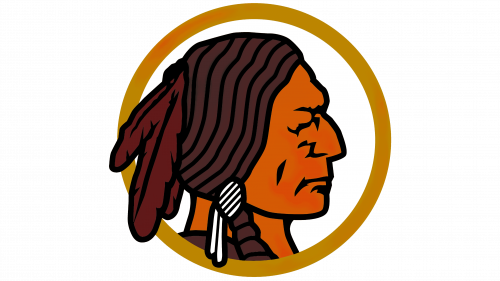 They basically reused the previous design, but opted for a more cartoonish style this time, as well as added coloring instead of sticking to the black-and-white palette (granted, the colors are mostly various shades of brown). Most other details stayed as they were, including the positioning of most elements. 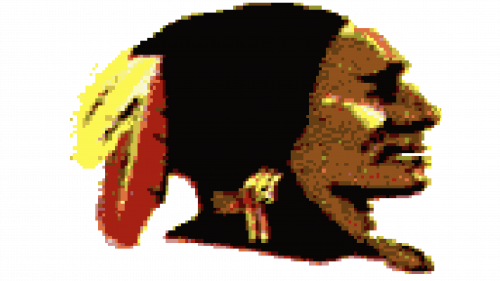 This time, they got rid of the ring that surrounded the head image and redrew the remains to look like metal. They also rearranged the features a bit and introduced some golden tint. 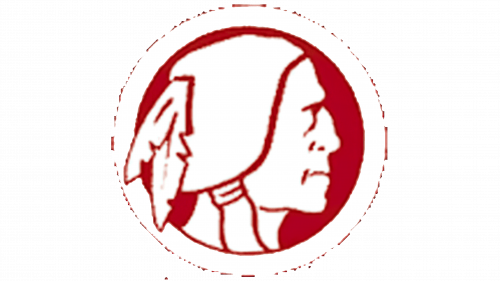 The 1960 logo looks a lot like the 1933 design, except they used red for details that were formerly black (except the hair and few other). 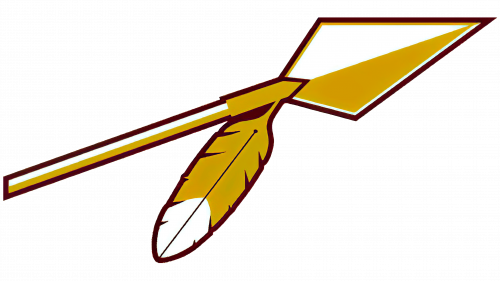 In 1965, they introduced a new approach: instead of a head, the new logo featured a tip of an arrow, colored white and golden, with a feather of the same color sticking right from underneath the head. 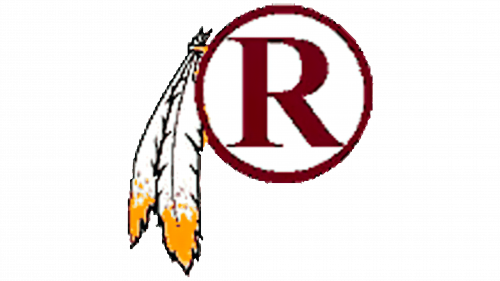 The 1970 emblem is a big capital letter ‘R’ encircled by a ring of the same color. Besides that, there are also two golden-tipped feathers sticking out from its left side. These are also longer than the one from 1965, and more nuanced. 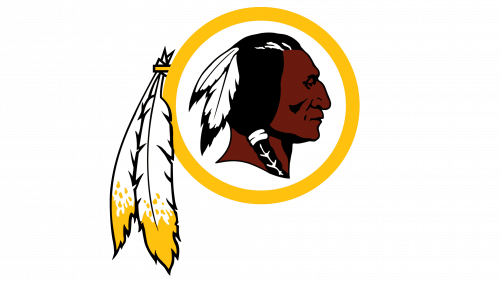 The next season, they decided to supplant the red ‘R’ with an Indian profile almost exactly as it’s seen on the 1952 metal design, but made into a normal texture and given ordinary colors (and also stretched vertically for better proportions). The ring also changed coloring to gold. 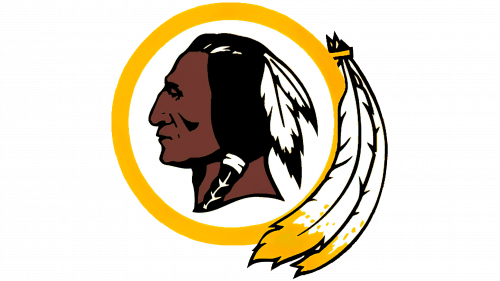 They mirrored the logo in 1982, curved the feathers to stick closer to the ring and actually enlarged everything besides the said feathers. 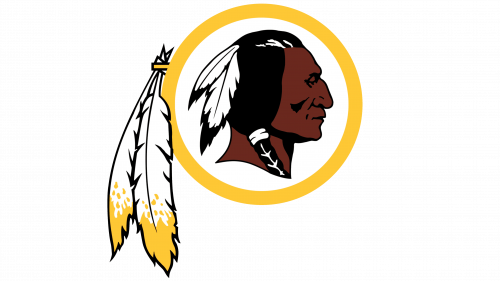 The changes were reverted back to the 1972 design, except for some color reshuffling. 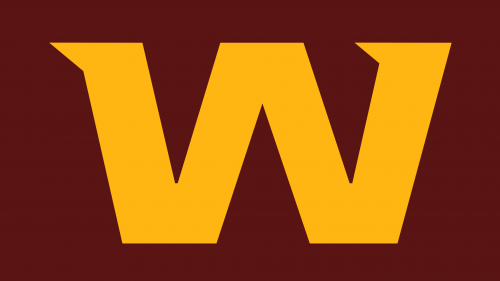 By 2020, they dropped the ‘Redskins’ from the name and were known as just ‘Washington Team’. The new logo depicted a simple (even if slightly more pointed than usual) yellow ‘W’ put inside a burgundy red (the team colors stayed the same). 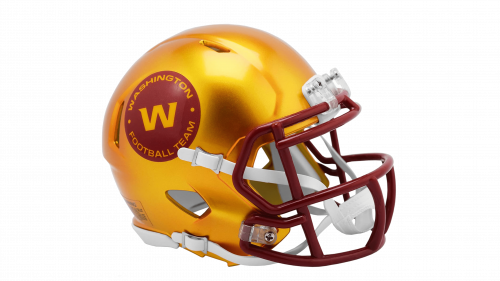 The most recent properly recorded helmet design is 1971. Much of the surface is yellow, except a single red stripe going through the midline of the helmet. Additionally, this short-lived design used an ‘R’ emblem on the temple area, except the tips weren’t golden, but red.
The following year, 1972, they dropped the ‘R’ logo and simultaneously rearranged their helmets into the mostly red ones with two lines of white and yellow going through the middle. The emblem of the Indian’s head with the big feathers sticking out of it was usually seen on the sides. 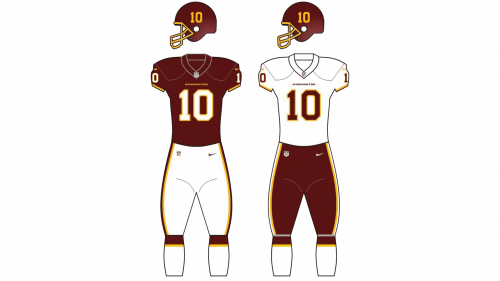 For much of their history, Redskins used red, white and yellow for their uniforms. Prior to the 2019, they often used yellow pants with red or white jerseys. Yellow was also present on the helmets – mostly on face protection. The alternative little-used designs also included beige pants, red jerseys and brown helmets.
Later, they started using the combinations of burgundy/white: one for the pants, and the other for the jerseys. The stripes throughout the uniform were yellow, but the new uniforms actually use much less yellow than below. In addition, the socks are also white exclusively.

West Ham United is one of English football teams, based in London. They compete in the Premier League

Philadelphia Eagles is an American football team from Pennsylvania. Eagles are amongst the older NFL

Tampa Bay Buccaneers is a Floridian American football team. They were established in one of the later